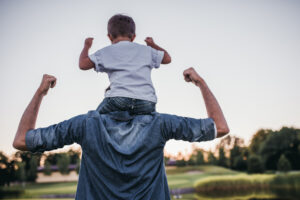 Legitimation is a way for a father to claim legal parentage of a child “born out of wedlock.” It goes beyond a mere acknowledgment of paternity. In Georgia, establishing paternity gives a court the power to enforce a father’s duty to support a child financially, while legitimation gives a child the right to inherit from a father, as well as the right to obtain family medical history on the father’s side, and the right to placement in the home of a relative on the father’s side in the event that the mother becomes unable to care for the child. Legitimation also gives the father the right to inherit from the child, and the right to petition the court for custody or visitation. Without legitimation, only the mother of a child born out of wedlock has any custody rights.

Born out of Wedlock

Generally speaking, a child in Georgia is “born out of wedlock” if the parents aren’t married to each other at the time of the birth, and the child is not legitimized after the birth. If the parents’ marriage is annulled after the child is born, the child will still be legitimate. If the mother is married when the child is born or has ended a previous marriage less than about nine months prior to the birth, the law presumes that the mother’s husband (or former husband) is the child’s father, and the child is legitimate. If the couple conceived by means of artificial insemination after mutual written consent, the presumption of legitimacy is absolute.

How to Legitimize a Child Born out of Wedlock?

The old laws in Georgia used to allow a biological father of a child born out of wedlock to sign an “acknowledgment of paternity and legitimation” form at the hospital during the child’s birth to be deemed “legitimated.” However, doing so still did not give the Father custody or visitation rights and the Father would still have to take the extra step to file a lawsuit against the Mother to request custody and visitation rights. This law caused too much confusion for fathers. As a result, the legislature repealed this law effective July 1, 2016.  Therefore, you must do more than “sign papers” at the hospital and more than “sign the birth certificate” to get legitimized.

The biological father of a child born out of wedlock may render his relationship with the child legitimate by filing a law suit in the superior court of the county of the residence of the child’s mother or if the mother resides outside Georgia or cannot, after due diligence, be found within Georgia, the petition may be filed in the county of the biological father’s residence or the county of the child’s residence. In the petition, the Father can request that his relationship with the minor child be deemed legitimate which will establish the Father’s parental rights.

In addition to legitimation, the Father can request the he be awarded joint legal custody, primary physical or joint physical custody, parenting time, and that child support be established for the child. The Father can also request that the minor child’s last name be changed to the Father’s last name and that a new birth certificate be re-issued reflecting this change.

Our attorneys at Anene Farrey & Associates, LLC are passionate about representing Fathers and will go the extra mile to ensure that a Father’s parental rights are protected.